A controversial position from the Guardian.  The fiscal treatment of 3D printing is one of the big considerations that Governments ought to start planning for, particularly given the difficulty of taxing international trade of things when those are digitally transmitted to local printers.

The automation revolution will cost jobs and cause massive unrest. Labour are ahead of the curve when they say that those affected must be supported 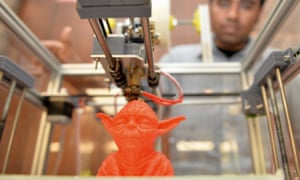 on has just been given a new toy car. It’s small, blue and remarkably cute-looking for something that threatens one day to cost a lot of people their jobs. For what’s unusual about this car is that it wasn’t made in a distant Chinese factory before being shipped back to a warehouse here, then trucked to a shop, or dumped on a doorstep by an overworked Amazon driver with no time to ring the doorbell.

This one came straight off a 3D printer, one of those faintly space age-sounding gizmos that works a bit like a normal printer except that you load it with plastic fibres instead of paper, and then programme it to “print” a solid object according to your preferred design.