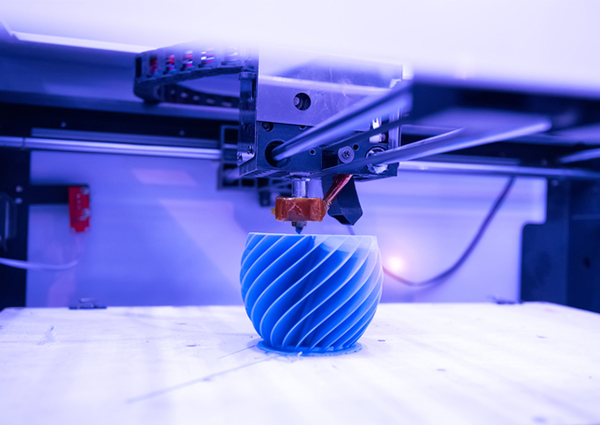 Over the last 5 years, 3-D printing, also known as additive manufacturing, has had a tremendous influence in our industry. It is considered the current and future of almost any conceivable form of fabrication.  Though this technology has been embraced by enthusiasts from small-time makers to international aerospace ventures, questions about its cost effectiveness are paramount to widespread adoption. Here’s why.

Costs of production for additive manufacturing fall into two categories: “well-structured” costs, such as labor, material, and machine costs, and “ill-structured” costs, which can include machine setup, inventory, and build failure.  Right now, most cost studies focus on well-structured costs, which comprise a significant portion of 3-D printing production and are cited by detractors as evidence of cost ineffectiveness. Unfortunately, these studies focus on the production of single parts and tend to overlook supply chain effects, thus failing to account for the significant cost benefits which are often concealed within inventory and supply chain considerations.

Eos was the goddess of dawn in ancient Athens. The rosy-fingered beauty in a saffron-yellow robe had an ability that set her apart from all the other titans in Greek mythology: She would hurry on ahead of the Sun — Helios — the giver of all life.

Hers is also the name of a German company, EOS, founded in Munich in 1989, although in this case, the word isn’t drawn from mythology. It’s an acronym, short for Electro Optical Systems, a term that describes laser systems. Still, the Bavarian tech company shares an important trait with its ancient namesake: It too wants to always be ahead, the harbinger of a sunny future.

3D printing has the potential to change how valve developers design and develop products. In the valve manufacturing industry, a variety of traditional designs can now be 3D printed including servo valves, gate valves and check valves. The beauty of the 3D printing method is that these valves can easily be manufactured without having to place an order and wait on shipment. What’s more, any size, shape or custom design can easily be created with quality precision. When designers and engineers develop products such as these, they may be eligible for Research and Development Tax Credits, which are available to stimulate innovation.

From auto makers to industrial companies, manufacturers are looking at how additive manufacturing, or 3D printing, can streamline its processes, decrease costs, and more.

“As industrial 3D printers go from stand-alone systems, used mostly for prototyping, tooling and single part production to becoming the core systems within integrated digital mass production lines, a number of opportunities are expected to emerge in the transformation of the factory of tomorrow,” said market research firm SmartTech said.

The market is growing substantially. In fact, Research and Markets forecasts that the global market for 3D printing metals, a key ability for manufactures, will reach a value of $12 billion by the year 2028.

Boston, Massachusetts is coming into its own as a hub of advanced technologies, championed by an expanding array of strong businesses and fed into through a wealth of prestigious local institutions of higher education. 3D printing is, unsurprisingly, thriving in such an environment, and strongly featuring in this picture is high-strength 3D printing company Markforged, founded in 2013 by CEO Greg Mark. I recently enjoyed the opportunity to visit Mark and several members of the team at the company’s headquarters in Watertown to discuss technology on their turf rather than at 3D printing shows around the country.

The Watertown facility is new to Markforged — my visit was, in fact, just three days after the team moved into the 43,000-square-foot space. The move was necessary, as the young company has been growing quickly with some impressive recent upticks in business. Markforged, now 85 employees strong, outgrew its former 16,000-square-foot HQ in Cambridge, and is already working to fill the new capacity, with the team expected to expand beyond 100 members by the end of the year. The growth in space and personnel is supported by some serious business increases, as Markforged reports more than 300% growth since the start of 2017, which they note as being more than any previous year in the history of the company. Strong sales led to achieving profitability in the first half of 2017.

Asia Pacific is the world’s largest manufacturing market. It currently represents half of the $12 trillion global manufacturing industry, and continues to evolve and grow. The main players in the region – a diverse and dynamic collection of global brands, huge contract manufacturers and materials leaders – are all rapidly innovating and transforming themselves to meet the needs of our evolving marketplace.

This is exciting for all of us in the region. But there is a more exciting opportunity on the horizon: to begin upending the manufacturing process through 3D printing. 3D printing, also known as additive manufacturing, is the process through which objects are assembled layer by layer out of plastic, resin, or powdered metal. It is fast and it is efficient. And a result, it can shorten the product-development life cycle and cut costs on the assembly line.

Dassault Systèmes has become a major player in the 3D printing industry over the last decade, mostly due to its advanced 3D design software as well as the useful integration of design, simulation and production tools provided by its 3DExperience platform. A productive collaboration with Airbus has also seen the French company at the forefront of 3D printing’s expansion into the aerospace sector. It could now be on the cusp of bringing about another minor revolution in the worlds of 3D printing technology and manufacturing, as it has announced a new business strategy that will make all its products available for free.

License fees for Dassault Systèmes’ impressive range of 3D design and printing solutions can be prohibitively expensive for many companies, with its multi-platform software suite CATIA costing around EUR 15,000. This is all set to change, as the company transitions towards a new economic model. Users will be able to access CATIA, Solidworks, Simulia and all other Dassault Systèmes products entirely free of charge.

Instead of charging to use its software, the company will be rolling out a new online intermediation platform, or a ‘marketplace’, which will generate revenue according to a commission-based system. Once a project is completed, and the design is sent to a 3D printing service or company for the final stage of production, Dassault Systèmes will charge a fee to the 3D printing provider based on the value of the product.

Despite 3D printing’s continued growth, there are some limitations that the technology isn’t able to surpass

3D printing has already been used in what can be considered mass production. Boeing is printing more than 200 parts into its planes, Airbus will be 3D printing in excess of 30 tons of parts a month next year, and GE has its Leap Engine.  Recently, Stratasys and Formlabs produced machines that automatically replace the build platform in the companies’ respective printers. This can make 3D printing more attractive to larger volume batches.

Recent Machine Design articles have discussed how 3D printing is disrupting different markets, including automotive, aerospace, electronics, and gaming. And yes, it’s a fascinating time to see how far 3D printing will go, but the current technology isn’t capable of replacing traditional technologies. Ron Hawley, the chief science officer of Integrated Composite Products Inc. (ICP) offered the following example: “Imagine the first four-wheeler. It was probably made with a lot of metal. Its maker may have had access to a mill and some bending equipment, so it seems logical. However, as sales increase, you need to make things faster to keep up with demand. If milling a part takes 20 minutes, molding it with a thermoset might take five minutes. In this example, it wasn’t necessary to save weight or cost—it was imperative to fill orders.

With its capability and widespread use, 3D printing has evolved from being a novelty to becoming an integral part of the manufacturing process. Whether you’re developing a prototype, or seeking to create an on-demand, customizable product, it’s time for businesses to consider the technology.

The 3D printing market is projected to grow from US$5.2 billion in 2015 to US$26.5 billion in 2021. Even if 3D printing penetrates only 5 percent of the global manufacturing economy, research by Wohlers Report estimates that it would reach US$640 billion annually.

Globally, 70 percent of businesses are getting hands-on experience with 3D printing. Asia-Pacific accounts for only 27 percent, indicating an ample amount of room for improvement to expand the 3D printing industry in the region.

Greater China as well as both emerging and mature markets in the Asia Pacific region are expected to experience a combination of large 3D printer shipments and high growth rates through 2020.

Business Insider is reporting that the former CEO of Autodesk – Carl Bass – has joined the board of directors of a company that allegedly wants to bring the Amazon business model to 3D printing.

The company is called Formlabs, and Business Insider says it is “…on the vanguard of a new wave of 3D printing” – one which focuses less on consumers, and more on helping businesses rethink manufacturing. Formed in 2011, Formlabs is said to be looking to reinvent both manufacturing, and manufacturing jobs.

The company’s competitive advantage may be in its newest model of 3D printer, which it dubs the Fuse 1. Fuse 1 is designed to be an industrial benchtop product and, at about $10,000, it’s competitive with other printers in its range, but said to be far more accurate.

In a promotional video on the Formlabs website, the company says it’s time to get back to making things where they’re designed and to “bring back the human touch.” For relatively small, precision parts created in photopolymer – such as, says Business Insider, bike helmets, shoes, or electronic gadgets – this printer could be a game changer and could keep production of custom or replacement items local, rather than outsourcing them overseas.

Back to Amazon – Formlabs CEO Max Lobovsky was inspired by the way Amazon Web Services gave developers affordable access to the cloud in order to build their software. Formlabs, likewise, wants to shrink the supply chain and create the same business opportunity for those who create physical goods.