3D printing is hitting the runway at New York Fashion Week as textiles are using the technology for designs.

Stratasys, threeASFOUR and Travis Fitch collaborated on the Chro-Morpho collection, which is inspired by microscopic colors and light filtering of butterfly wings.

Using a Stratasys J750 PolyJet printer, designers were able to add polymers to textiles. For Stratasys, the aim is to develop the fashion market and enable more than 500,000 combinations of colors, textures, and transparencies.

Bruges-based Hoet Studio can be considered one of the first pioneers in seriously introducing 3D printing for eyewear frames production. The studio, led by Bieke Hoet, has been 3D printing frames since 2011 and is to date the only manufacturer of luxury 3D printed metal frames in its Couture collection. Hoet began 3D printing frames with support from local company Materialise (also headquartered in Belgium, in nearby Leuven). The two companies have since collaborated on multiple projects which have been instrumental in creating an entirely new vertical for AM. Now, the two roads cross again in this interview which we propose to our readers for the occasion of our AM Focus on Eyewear. 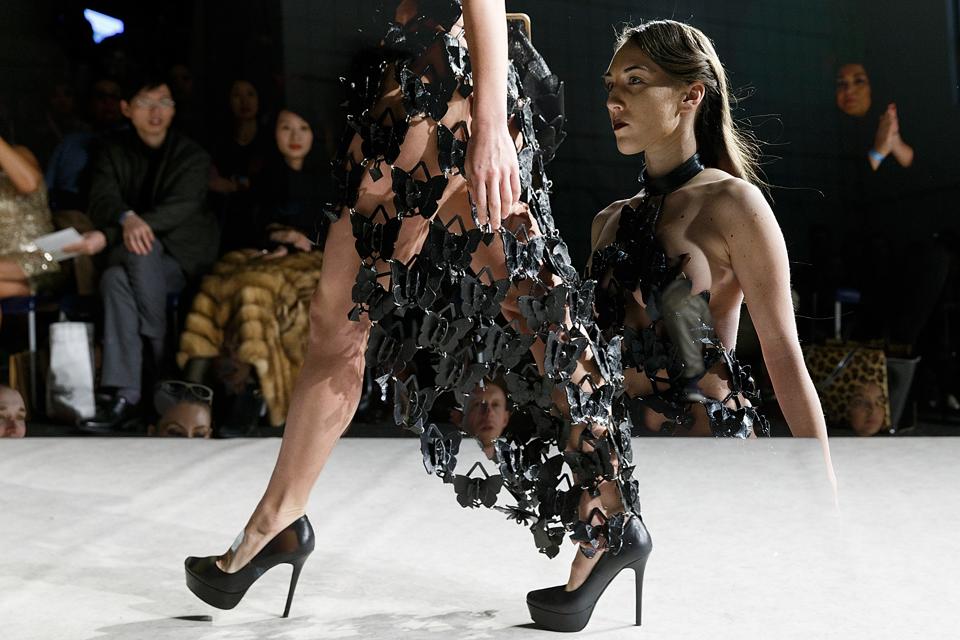 3D printing has been described as nothing short of a new industrial revolution that holds potential for major innovation in terms of business models and consumption patterns. This technological development is part of the 4th industrial revolutionthat is characterized by a range of new technologies fusing the physical, digital and biological worlds, impacting all industries including luxury fashion.

3D printing has been specifically helped by advances in material science, digital design and on-demand production capabilities. There are three main technologies behind 3D printing. The most common is FDM (Fused Deposition Modelling), where a nozzle deposits layers of melted filaments one after the other at a temperature of around 200 degrees Celsius. Ministry of Supply is a company best-known for their no-holds-barred approach to solving the most common complaints professionals have with their clothing.

Founders Aman Advani and Gihan Amarasiriwardena met at MIT and launched their startup on Kickstarter a year later.

In order to prove just how serious they were about comfort — since fit can more or less be conveyed in flat, 2D images while window shopping online — one of the founders even ran a half marathon in one of the company’s suits.

But they’re not just out to make a point, and it’s far from gimmicky — even though the novelty of what they’re achieving might allude to something otherwise. As natural symptoms of the new processes and clothes they’re creating, Ministry of Supply is making measured, definite growth and actually impacting (with the exponential possibility of much more impact in the future) on the supply chain itself.

3D printing is often touted as the technology of the future. As it progresses, we will continue to see innovation and changes in manufacturing we simply never imagined. Nearly every industry is already seeing an impact though, whether minor or major, and designer Maria Alejandra Mora-Sanchez is quick to point out that she sees 3D printing as the future of fashion. We are listening to what the 2017 Red Dot Award winner has to say— as well as enjoying taking a look at her incredible new designs.

Mora-Sanchez was surprised to see such a lack of 3D printing in fashion as an industrial design intern and decided to make that the focus of her thesis. She worked with Cosine Additive to make some incredible 3D printed clothing patterns.

3D printing is starting to have a serious impact on the world of fashion, and we reported a few years ago on the work of Israeli fashion designer Danit Peleg, whose five-piece graduation collection for the prestigious Shenkar College of Design was entirely built using a desktop 3D printer. The pioneering fashionista has been busy since then, promoting the use of 3D printing technology to revolutionize garment design and production, and she has recently achieved a major industry milestone, with the first ever 3D printed jacket becoming available to order on her website.

Peleg’s limited edition bomber-style jacket is made from a special rubber-like material, with a fabric lining. It can be personalized according to the customer’s size and colour preferences, and each item will be one of only 100 ever produced. With this exclusivity comes a pretty hefty price tag – each jacket will be set you back around $1,500. However, given the time and materials  that were required for production, Peleg claims that this is a  fair price, and why not pay a little extra to wear a piece of 3D printing history?

The world of fashion retail could be completely revolutionized in the upcoming years, with the influence of 3D printing technology, and a new software solution released this year could be one of the first major signs pointing the way forward for the industry. Hitting the market in September, Share Cloth’s application of the same name will be compatible with Windows and Mac OS, and it will allow designers to create 3D designs for products or garments that can be 3D printed.

The current state of the global fashion industry seems unsustainable for a number of reasons. Most garment production takes place far away from the initial design centers or sales locations, in high-output, low-wage economic environments. This long-distance supply chain is made even more complex and unwieldy by the dominance of huge high street and online retailers, which require an intermediary network of warehouses and distribution centers. When a designer comes up with a new idea for a product, it can be sometimes up to 6 months until the garment line is available for sale to customers.

“I can only imagine how incredibly sci-fi it must feel to hold a teacup you just casually printed at home with your 3D printer. A perfectly circular, perfectly manufactured teacup whose only prerequisite for existing is your ability to press a couple of buttons. Up until the era of 3D printing, to make a teacup I’d have to go to pottery class and struggle through batches of wonky creations and bouts of anger management before giving up and going to Selfridges.

Now, replace the teacup and pottery class in your mind with just about any object and manufacturing process, and you’ve got yourself an idea of the phenomenally disruptive effects of potentially one of the most important technologies of the 21st Century. Did you imagine an intricately knit dress? A pair of fierce high heels? Or maybe a rounded shoulder bomber? You probably should have, because after houses, children’s toys, cars and prosthetic limbs, 3D printing’s potential has mainly entered the realm of fashion.”

It’s been a big week for shoes and 3D printing, as just yesterday New Balance released their (extremely) limited edition MS066 sneakers with 3D printed midsoles, and now Adidas has announced their innovative UltraBoost Uncaged Parley sneakers, made almost entirely from recycled ocean plastic and which owe much of their development to 3D printing technologies.

Just a year ago, Adidas teamed up with Parley, an organization dedicated to raising awareness about ocean pollution and plastic waste, to design a shoe that could be made from recycled ocean plastic. The result of that experiment was an impressive footwear specimen, which combined recycled plastic materials and Adidas’ 3D printed Futurecraft midsole. While the shoes marked a step forwards for sustainable footwear, they were not exactly retail ready, and were more significant as a concept shoe.

Now, however, Adidas and Parley have moved forwards once more with the unveiling of their UltraBoost Uncaged Parley sneakers, which go on sale next month and will be retailing for $200 a pair. Initially, Adidas will be releasing 7,000 pairs of the new recycled sneaker, but reportedly hope to have over a million pairs available within the next year or so.

From parts for fighter jets, to prosthetic arms and legs, and concept cars, 3D Printing is being used to manufacture a huge variety of items. And with its use on the rise, it’s putting pressure on organisations to reassess their manufacturing and supply chains. 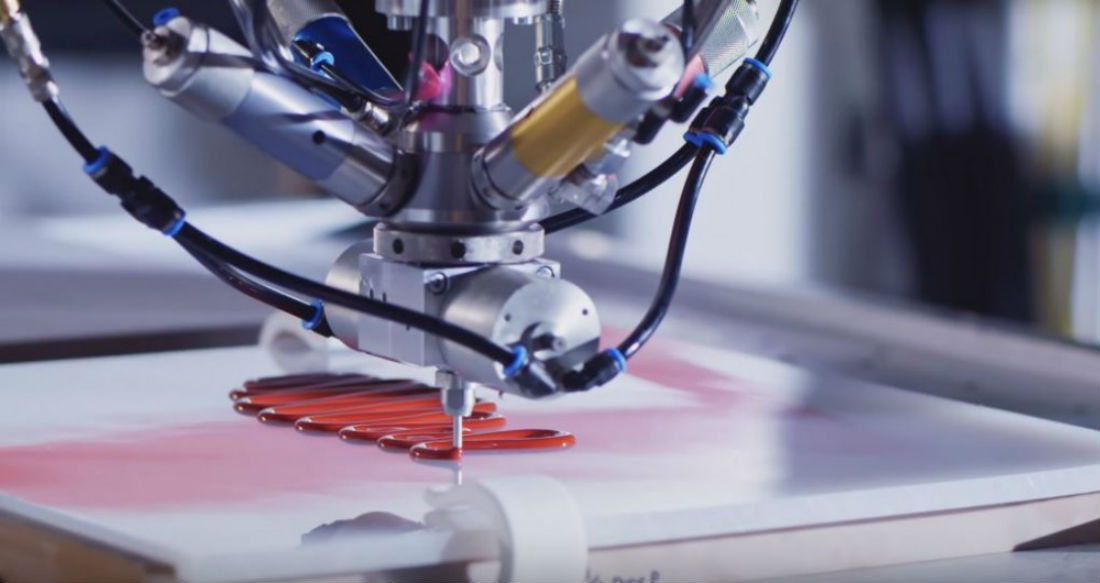 The latest industry to come into the sights of the 3D Printing revolution is one that might surprise you – fashion. It’s not strictly a new phenomenon (it’s been over a year since these items first appeared), but it’s worth noting for a couple of important reasons.

Firstly, unlike in other industries, the well-known clothing manufacturers are at the forefront of the efforts. Secondly, the consideration of what this might mean for the fashion industry in terms of manufacturing and intellectual property.